After a pretty crazy 2016 that saw some of the most incredibly creative individuals in the world taken from us, it seems pertinent to reflect on my own somewhat auspicious year. I released 36 episodes of The Vincast wine podcast with incredible guests like Max Allen, Viv Thomson, Jane Faulkner, Guill de Pury and Iain Riggs. On my YouTube channel I chronicled the making of my first wine – a Heathcote Sangiovese – which I will be releasing early next year under the brand Vino Intrepido. I was named the Australian Alternative Varieties Wine Show Fellow and got a behind the scenes look at Australia’s most exciting wine show. In addition I was as a finalist for Digital Wine Communicator of the Year with Wine Communicators of Australia (the award was won by The Vincast guest Jane Thomson). Most importantly of all, I have a son arriving next year around the same time that I will hopefully be making my next wine(s)!

In 2016 I also tasted some incredible wines, and released almost 70 video tasting reviews under the Let’s Taste series on the IntrepidWino YouTube channel. Some of the wines were from my cellar, some were submitted by wineries, and some were gifts. The wines below are the ones that had the biggest impact on me this year! 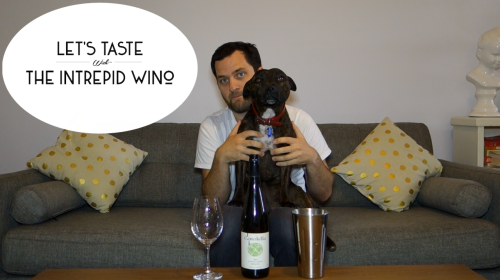 The Intrepid Wino with his tasting partner Milly

END_OF_DOCUMENT_TOKEN_TO_BE_REPLACED

I was thrilled to sit down with Sierra Reed Milne for Episode 101 of my wine podcast, The Vincast! Originally from California, Sierra has had an incredible and diverse journey that has led her to making her own wines her in Australia. She gave me a bottle of one of her already sold out Reed Wines from the 2015 vintage, and I thought I would share my impressions here on the IntrepidWino YouTube channel, let me know what you think! Stay tuned for Episode 101 of The Vincast with Sierra!