When I embarked on my 16-month wine journey around the world, the first leg was up the west coast of the United States. While in the Willamette Valley region of Oregon, I was lucky enough to visit many of the most important and oldest wineries, including all of the wineries of my three guests on this episode of The Vincast. My first guest is winemaker at Stoller Family Estate, Melissa Burr, who is the only Oregon-native on the episode! The second winemaker guest is Dave Paige from Adelsheim Vineyard (one of the founding wineries of the region), who has been there for fifteen years! The final guest was Harry Peterson-Nedry, who established his Chehalem estate in the hills from which the winery takes its name in 1990, and has been one of the regions best ambassadors.

Visit Pinot Now to find out which Oregon wines you can purchase in Australia! 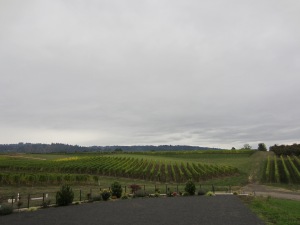 Wineries don’t need to be on the vineyards they source fruit from. They don’t even need to be in the same region. Wineries in the Willamette Valley (Oregon) source fruit from Walla Walla (Washington). Wineries West of the Cascade Mountains in Washington source fruit almost exclusively from the East of the state. Red Mountain, a quarter of the size of the Walla Walla AVA, actually produces more fruit, but very little of the wine is made there. If a winemaker wants to make a particular style of wine, they will find the fruit they need. Many wineries deal with the tyranny of distance in different ways. Numerous wineries in the Western part of Washington were established close to Seattle, such as in Woodinville. The town of Walla Walla has been set-up as a wine tourism oasis. The Willamette on the other hand is naturally blessed with being less than an hour from Portland, but the Southern Oregon regions are not so lucky. The fruit for the wine may travel far, but visitors to wineries shouldn’t have to, and wine tourism hubs are as common as shopping districts in town.

END_OF_DOCUMENT_TOKEN_TO_BE_REPLACED

I’m starting to get used to the disappointment that I can’t spend more time in all the places I am going, and Portland was one of the hardest to leave so far. It’s much nicer staying in the hostels because you are around people more and there’s stuff to do in the evening. It’s nice having some space and quiet in the motels, but it’s pretty boring and lonely. It does give me a chance to catch up on things and look ahead for arrangements, but I do waste a bit too much time flipping through the thousands of channels on the television.

END_OF_DOCUMENT_TOKEN_TO_BE_REPLACED

One of the major things I’m going to take away from my time in the Willamette Valley is that there are so many variables in wine that can influence style. Even though pinot noir is the king of grapes in Oregon, there is such a wide variety of styles due to site, clone, vintage and winemaking. In one day today I saw such a range of wines that it was hard to believe they all came from the same grape variety.

END_OF_DOCUMENT_TOKEN_TO_BE_REPLACED

It’s safe to say that wine regions in the USA, much like in Australia, are big. This makes it difficult to categorise a region as having a certain style or characteristic. This is partly because there are differences in approaches to winemaking, but mostly because there are countless micro-climates and differences in appelation and site within a broad region. The size of the region also means you are covering a large distance when you are visiting, and getting from one appointment to another in time can have complications.

END_OF_DOCUMENT_TOKEN_TO_BE_REPLACED

Come on down to pinot town (Willamette Valley, Oregon – Day One)

I think that Alexander Payne and Jim Taylor richly deserved the Academy Award for best adapted screenplay for Sideways. Having finished Rex Pickett’s sequel to the novel Sideways, and seeing how poor not only his prose is, but also his proof-reading, I can only imagine how badly written his first book must have been. It’s been interesting to discover what happens to the characters, and it might make an interesting film sequel. It has also proved interesting to read it as I have travelled up the west coast, following almost the same route as Miles and Jack. I have now arrived at the zenith of the novel, and the primary wine region the characters reside in. That region is the Central Otago equivalent of North America; the Willamette Valley. Steve Naughton from Pinot NOW had given me a detailed list of wineries to visit, and over the past few weeks I had contacted most of them, and most had got back to me. Much like the rest of my trip up the coast so far, my timing was a little off as vintage was fast approaching and the much smaller wineries in the Willamette Valley were tentative to set anything up until closer to the date. They were very positive about me visiting, which was a lot more than I had gotten out of some Californian regions.

END_OF_DOCUMENT_TOKEN_TO_BE_REPLACED

What a change, to drive from Ukiah in Northern California into Southern Oregon. Once you get past Redding, California the scenery becomes a lot more dramatic. You start to see a lot denser pine forests and heading up into more mountainous climbs. The highway becomes steeper and more curvy, and before long you see the snow-covered Mount Shasta approaching. And not long after that, you are in Oregon, without any fanfare at all. It’s a pretty long drive from Ukiah to Eugene, so I broke it up by stopping in Medford at the heart of the Rogue Valley.

I called into the second largest winery in the region, named Roxy Ann Winery. Historically the estate was covered in orchards, but was converted to wine grapes just over ten years ago. They are best known for their pinot gris of which they make quite a bit, but I thought the standout in terms of value was the Honour Barn Red. I got the chance to try their pear wine, which was very dangerously easy to drink. The other winery I dropped in on was Del Rio, the largest in the region. Unfortunately owing to the fact I didn’t have a business card “proving” that I worked in the wine industry (something I have since remedied thanks to Staples’ four hour turnaround) I could only try one wine. Both wineries had a Claret, a term that apparently can be used as long as it was before the watershed imposed by the EU.