Morgante Nero d’Avola 2010
A nose of sweet juicy blackcurrants and blackberries, with very plummy and sweet oak notes too, whilst on the palate was very unctuous and rich, introducing chocolate and cassis elements, mellowness boldness and slightly spicy.

Don Antonio 2009
Had similar fruit characters but in a more serious vein, and also showed violets and earthy characters on the nose, whilst on the palate was both toasty and succulent, showing balance, integration of oak and alcohol with fruit, and dense tannin structure. 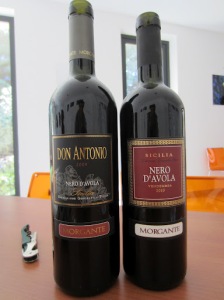 The two wines made by Morgante

To say that Sicily is diverse is an understatement. There is a very good reason why Sicily has the longest harvests in the world, often taking 90 days. For this reason it is impossible and pointless to think of Sicily as one region, which makes me question the logic of creating a new DOC for all of Sicily. In other large and diverse Italian regions like Tuscany, Piedmont and Puglia there are only IGT classifications for the entire region, no DOC which is usually an indicator of quality. A DOC just for Sicily would merely serve the large wineries to continue blending fruit from anywhere on the island, and charge higher prices for it. My suggestion would be to continue highlighting the sub-regional diversity of Sicily by creating a number of DOC and/or DOCG classifications for many of the best areas, to add to the small amount of DOC classifications, and only one DOCG (Cerasuolo di Vittoria). I have absolutely no issue with wineries using fruit from different parts of the region, much like they do in Tuscany or Veneto, but to imply that Sicily is one homogenous region is a fallacy and should be designated merely as IGT as it already is. One of the wineries that would possibly agree with me is one that I visited earlier in the week and returned to on my final day to one of their other estates. This winery is Planeta.

END_OF_DOCUMENT_TOKEN_TO_BE_REPLACED

When I think of Marsala, usually the first thing that comes to mind is the quote used as the title of this post, from the Australian film Chopper starring Eric Bana. The quote comes from a scene in a nightclub where Chopper’s girlfriend orders a marsala and coke, to which the character Neville Bartos congratulates her on the wise decision. It wasn’t until I learnt what marsala actually was that I realised the cultural significance of this seemingly innocent exchange. Marsala is a wine coming from the town of the same name in the south-western corner of Sicily, made usually from white grape varieties (partly explaining why there are more vineyards planted to white than red on the island), and fortified similar to sherry. The wine was discovered by an Englishmen, much like port and sherry were, and were fortified and sweetened to appeal to the English market and allow them to survive the transportation. Marsala at one point was a very famous wine, and many houses were established in the 19th century, some of them English. As demand and production increased, the quality went down and marsala began to not be taken very seriously, much like other fortified wines. Unlike port and sherry the reaction was not to increase quality, but to introduce new flavours like egg and almond, and it was about this time that in Australia marsala was used in one of two ways. It was either used as a mixer in bars, purely for its alcoholic function, or in cooking. Now it is only really used for the latter, and the market is tiny. There are still dedicated houses that produce reasonable volumes of commercial marsalas with a little premium sometimes aged wines, and there are very small and passionate producers fighting an uphill battle to return the Marsala name to its former glory. Unfortunately I couldn’t find any marsala producers to welcome me, so I got to see the town by the seaside and catch up with an Italian wine blogger and journalist I had met in Vittoria for dinner. I also visited one of the most famous modern Sicilian wine brands, Donnafugata.

END_OF_DOCUMENT_TOKEN_TO_BE_REPLACED

Well I guess it’s to be expected that when you spend about 13 months driving around the world, with already at least 50,000km driven across three continents, there are going to be complications with cars. In a rental car in the Salta region of Argentina I had a navigator that wouldn’t charge, and driving on an unsealed national highway I got a puncture without realising, damaged the wheel and had to pay $200 for a new one. In Germany I attempted to buy a used car far too cheaply, that turned out to be a lemon and lasted only 4,000km. Thus I was forced to rent a car in Milan that I would return in Palermo (Sicily), driving for 32 days across 11 regions, then fly back north for the next leg in the South of France. I accidentally booked the return date a week too early, and had to have it amended over the phone. I didn’t realise they changed the terms, so that rather than having unlimited km I was restricted to 4,800km, and was charged for an additional 332 km. With only three days remaining, the Fiat 500 broke down on the southern coast of Sicily, had to be towed back to Gela where I had to stay in a hotel for the night, then get a taxi to a town an hour away to collect a replacement rental car. So I lost a night and half a day of wasted time, and was charged significantly extra for a completely different contract, additional fuel and kilometres. I also wasn’t reimbursed in either office in Sicily as promised, so am out almost 200 euro, which I now have to try to get back from customer service. The lesson learnt from both rental car experiences is never trust Europcar, as they were the company in both cases. I should have known better. It was definitely worth the drive to Agrigento before my appointment, as the Ancient Greek ruins are breathtaking as the photo below will support. The province of Agrigento is very warm, dry and relatively flat, so ideal for viticulture where the majority of fruit comes from in Sicily.