The basic rieslings are all very clean and fresh examples of the variety, and possibly the best value I have tasted, particularly the Pionier 2011.

Jesuitengarten Grosses Gewachs Riesling 2010
Had a rich mineralic honeyed peach nose, ripeness and texture on the palate and wonderful concentration and balance.

Jesuitengarten Grosses Gewachs Riesling 2008
Quite closed but slightly perfumed, had some richness and savoury elements, and was beginning to pick up some oily nectarine complexity.

Kalkofen Grosses Gewachs Riesling 2010
Much quieter than the Jesuitengarten, showing more earth and citrus with a firestone warmth on the palate.

Kalkofen Grosses Gewachs Riesling 2009
Brighter and juicier, and more approachable now than the 2010 is. It still has some of the earthy notes, but it is also picking up some subtle toasted nut complexity.

Pechstein Grosses Gewachs Riesling 2007
Unmistakable brooding contemplative nature of other vintages and estates. After almost five years it is showing some great tertiary characters, such as a sweet oily texture, dark currant concentration and superb volume. It is not a riesling for the feint of heart.

Deidesheimer Hohenmorgen Auslese 2007
Lovely and fresh with good balance of acids and sweetness, but isn’t really a patch on the sweet wines of the Mosel.

Hohenberg Kabinett Riesling 1976
Lovely and rich golden but not at all brown in colour. On the nose there was a fascinating lemon barley cordial and orange peel aroma, along with candied ginger and blackcurrant tea. On the palate there was so much complexity it was hard to pinpoint, but I did see some caramelized onion and hard cheese in there. It was nice to take the taste of this wine with me as I said farewell. 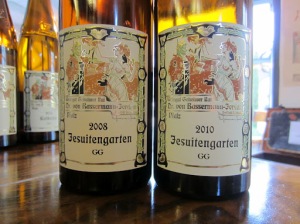 There seems to be a revolution taking place in the German wine industry, perhaps in reaction to market perceptions of the wine they produce. During the 1990s and 2000s there seemed to be a move away from the large volume blended sweet and fruity white wines of the 1970s and 1980s, towards very steely crisp and bone-dry wines. Today there seems to be a movement away from the aromatic and bright dry wines towards more complex textural and rich wines that retain concentration and mid-palate structure. Wineries also seem to be shifting towards more traditional techniques in an effort to craft wines in this style. Firstly in the vineyard the VDP is introducing classification of better parcels of vineyards, much like the French appellation system, and there also seems to be a movement to organic and biodynamic viticulture. Secondly in the cellars winemakers are reintroducing practices like extended must contact, barrel fermentations and oxidative handling. After almost three weeks in six German regions I am starting to wrap my head around the varietal, and see how each region expresses the variety using terroir and winemaking.