Weingut Gunderloch in the Rheinhessen region of Germany is one the greatest wineries in Europe if you are in the know. They are the only winery in the world to have received 100 points for the same wine in three separate vintages, for their incredibly rare trockenbeerenauslese (TBA). Johannes Hasselbach hadn’t intended on running his family’s estate, until in 2010 when his father became ill (since recovered), and his sister who had been involved with the winemaking relocating to Austria to work with her husband. An intrepid philosophy led Johannes to travel and explore, and he has slowly began to introduce this into the winery since then. He joined me in the Treasury Gardens of Melbourne on a sunny morning to talk about his journey. 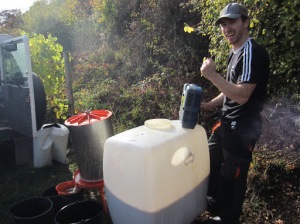 Johannes Hasselbach from Weingut Gunderloch working hard in the vineyard