I tell you what, if it weren’t bad enough that Chilean wines are poised to bring the world to it’s knees, they are also poised to bring the world TO Chile, thanks to wine tourism. Whilst you can probably find some similar experiences in other countries, particularly in California where wine tourism is a billion dollar industry, there is nothing like the value of wine tourism here, and the sheer impact of the environment. Not to mention the fact that Chileans are genuinely warm and welcoming to others, whereas in most western countries hospitality is merely about tips and gloss. Hosts are knowledgeable, respectful, modest and engaging. At several times during my stay so far, and no more so than in Colchagua, did I say to myself “it doesn’t get better than this.”

I started my day in the first winery I had contacted, as it was the one I was most familiar with. Casa Lapostolle was founded in 1994 by the Marnier family, of Grand Marnier fame. The intention was always to establish a world-class winery in Chile, and the small valley of Apalta was selected to establish in. As it is French owned it is only natural that the standards are extremely high, and the family know the value of investment, whether it be in viticulture or winemaking. Also being French, in many markets they rely on another French luxury brands company to handle their distribution, the company that also owns my former employer. Moet Hennessy distributes Lapostolle and the icon brand Clos Apalta in several important markets, namely the United States and Asia-Pacific. This is where I had first come across the brand, as the news of them finishing at the top of Wine Spectator’s Top 100 was pretty big.

The winemaker and communications manager Andrea was my host at Clos Apalta, a purpose-built winery for one wine (think Opus One or Quintessa). The architecture is breathtaking, and even more impressive on the inside (maybe more for industry people). Another gravity-flow winery similar to Amayna, it is dug into the hill and has seven levels. Each bunch is hand-picked and hand de-stemmed(!), before being transported to one of the lard oak red fermenters. There is no crushing performed, just cold soak maceration and natural fermentation. This results in a bit of carbonic maceration, lifting the fruit aromas. The maceration takes several weeks, kept at relatively low temperatures. The reds then go into 100% new French oak barrels for ageing, and after 24 months they are blended and bottled. The blend changes each year, but the focus is kept on carmenere, something Chile and Colchagua are well-known for. The 2009 vintage has just been released, and is a powerful yet elegant expression of Chilean red wine. The intensity of fruit is very pronounced, and it is understandable why the wine is such a big deal in the US and Asia. Unfortunately the oak is very pronounced at this young age, and needs cellaring. This is something I don’t believe in, feeling that wine should deserve cellaring not require it. I’m sure that the winemakers would prefer to hold back the release, but demand dictates they get it out onto the market. Click here to read more detailed notes on the tasting.

Not far down the road in Apalta is Neyen de Apalta, established by the family of Jaime Rosello who I met at Veramonte. This was the first official winery in Apalta, but the vineyards were not the first. Back in the 90s Jaime convinced his father in law to cease selling his fruit and create a single wine that would be the ultimate expression of the vineyard. Neyen means spirit, so the wine is the spirit of the Apalta Valley. Whilst the vineyard is 130 hectares, only 30 are used for Neyen. The rest was previously sold to other wineries to go into icon wines, but now they have partnered with Veramonte it is likely they will receive the lion’s share. This partnership is much better, as the absolute best fruit can just go into Neyen, and the rest can improve the quality of the Veramonte icon wine, the Primus. There are some seriously old cabernet sauvignon and carmenere vines here, which make a significant contribution to the quality of the wine. 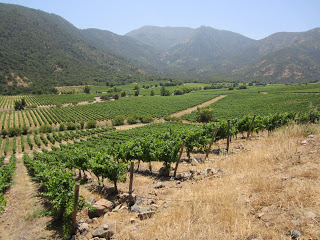 A visit to Neyen often consists of arriving in the morning and riding on horseback through the vineyard all the way up into the mountains for four hours. Upon returning you are treated to a tasting (which after all is only one wine). Adding in this level of experience brings gravity and luxury to this wine, as every element of the experience is about the best. Thanks to Jaime I was lucky enough to have a horse to myself for an hour (not in that way), which I took advantage of my riding up into the higher and newer parts of the vineyard. By this stage the day was getting warm, so the very well treated horse got tired quickly and navigated its own way back after an hour. Luckily I was on the back of it.

The hospitality manager Rodrigo then took me through the story of the winery, and we walked through the winery. Like Clos Apalta the winery is gravity-flow based, with no crushing. The first difference is at Neyen it is performed in stainless steel climate controlled fermenters at cool temperatures. The second difference is the ageing of the wine in barrels, which isn’t 100% new and is only for 10-12 months. The third difference is the wine sees up to three years of bottle age before release, so the current wine is 2007 rather than 2009. The final and what they feel is the most important difference, is the wine is a blend of just cabernet sauvignon and carmenere, whereas Clos Apalta also includes merlot and petit verdot. Rodrigo showed me the 2006 vintage, and you could see the difference that age makes, as it was becoming more toasty, leathery and earthy. The tannins were very supple and balanced, with a slightly savoury meat texture. The acids were the most notable thing, not being overshadowed by oak or exuberance of fruit. The best wine I have tried in Chile, for a fact.

A winery that Jaime himself had recommended and helped me get in contact with was Viu Manent. The winery was founded by the Viu Manent family in. It is a larger operation than Neyen and Lapostolle, producing somewhere in the vicinity of 800,000 cases per year. The winemaker Patricio is probably the most exciting (and excitable) I have met thus far, and he clearly cares for the winery and its employees. I found it interesting to note that despite its size there are only two winemakers. Patricio was keen to show me through barrel samples of reds that represented different varieties and parcels of fruit from their three vineyards, all from the 2011 vintage, that would be blended together to form a complete wine. In great detail he pointed out the nature of each vineyard and its nuances, and where each parcel of fruit came from. I’ve never gotten so much out of a barrel tasting before, and it made a huge difference when we came to tasting the finished wines. Amazingly enough, they actually have some tannat in one of their vineyards, but is used for blending mostly. The finished wine tasting was the most comprehensive I have had thus far in Chile, consisting of three different tiers. Click here to read notes from the tasting.

The fun didn’t end there, as we had been joined by the Director of Tourism Mitch, who had grown up in Adelaide and lived in Australia until age 21, when he returned to Chile. Mitch was nice enough to invite me to dinner in Santa Cruz, which by the time I had finished at Viu Manent meant 9pm. He took me to two restaurants, across the road from each other, and brought a few bottles along which we imbibed over the space of a few hours. The first restaurant was a Peruvian one, so of course we started with a Peruvian pisco sour (couldn’t tell the difference between the Chilean ones, too much of a novice), but the food was amazing. A ceviche followed by an octopus in a black olive sauce. The Italian restaurant was pretty large and adjoined a vineyard. The beef ravioli was very rich and delicious, and complimented the Viu 1 Icon wine superbly. Mitch regaled me with tales of hospitality in Australia, tourism in Chile and life in Colchagua. It made for an entertaining and slightly boozy finish to the day. Luckily the next four days are effectively holidays, so I can catch up on some work and sleep. Click here to see more photos from my day in Colchagua.