Like I was saying, it’s really hard to get around in Santiago in a car. It’s bad enough that roads make no sense and drivers seem to have no sense, but my navigator won’t even tell me what roads to go on! A passenger in the car today would have been appalled at the expletives coming out of my mouth in sheer frustration. If anyone knows anything about Garmin Nuvi 1300s please let me know because I can’t take much more of this. It took me 1.5 hours to travel 30km today! It almost ruins the spectacular scenery of the Andes Mountains towering over the Maipo Valley. 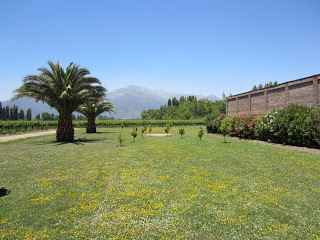 Since Chile gained its independence and French grape varieties began to be introduced, there has been a lot of foreign interest in the local wine industry. Numerous French, Italian and Spanish wineries have invested in Chilean wine either directly or indirectly for the last 100 years or so. One such company was William Fevre, most famously from Chablis in France. The winery is no longer in control of the group, with majority share being Chilean controlled.  At the site they have introduced a really interesting irrigation system whereby channels deliver water between rows so the roots seek out the moisture. The focus here is on two varieties; chardonnay and cabernet sauvignon. The chief winemaker Felipe Uribe was kind enough to welcome me into his winery to learn a little about his passion for these varieties and regions. Leading me through a barrel and tank tasting I was able to see how individual plots on the same vineyard can influence the variety.

The highest vineyards being sourced from are almost 1000m high, in the Maipo Canyon. The chardonnay from this altitude has a distinct citrus minerality, graphite and flint with amazing texture and mouthfeel. A chardonnay Felipe has set aside to potentially be a super gran reserva had an interesting peach and lemon curd with apple blossom aroma, with richer volume and creaminess, but a nice schiste acidic character. The cabernet barrel samples had quite a distinct herbaceous spicy capsicum aroma overlaying the blackcurrant and cassis, but with a hint of earthiness. The fruit character whilst very bold had great restraint and elegance, but as they were barrel samples they were very young. The higher vineyards had much more subtlety on the nose but were interestingly more intense on the palate. It was great meeting such a passionate winemaker in a new place like Chile, and I hope to meet Felipe again.

Out of fascination I was compelled to visit Concha y Toro, the largest winery in South America and with all their holdings the fourth largest wine company in the world. Despite repeated attempts to make an appointment I decided to visit, and was resigned to joining the public tour. It was surprising that there was no policy about discounting tour fees for those in the industry, let alone waiving fees. And so I had to pay for a visit for the first time on my trip. I was willing to pay though, as I had heard the tour was one of the best in the world, and I also wanted to experience the tour the way the general public would. They had a couple of different options, and I chose the 17,000 peso ($34) English tour with special wine and cheese matching, and after a $6 sandwich and a $4 coffee I had dropped $44, almost half my daily budget! The tour was one of the best executed I have ever seen, and included a nice mixture of fluff and accurate information. The highlight was when you are taken down into the actual Casilerro del Diablo (The Devil’s Cellar), all the lights are turned off and a ghostly voice explains the history of the cellar. The owner about 150 years ago noticed bottle going missing out of the cellar, and determined they were being stolen by locals. To put the fear of God into them he started a rumour that the Devil resided in the cellar, and the plan worked. I’m sure most tourist eat it up, and it clearly works for them as they have thousands of visitors every month. There was a nice healthy serving of cheese at least, but the wines aren’t even worth talking about.

Click here to see more photos from Day 2 of the Maipo Valley.