Back in 2007 renowned Australian wine commentator and educator Campbell Mattinson published a book entitled “Why the French Hate Us – the real story of Australian Wine.” I’m very ashamed to admit that I haven’t actually read this book but I have certainly heard wonderful things. It is on my pile of shame. The interesting thing is that it isn’t just the French but Europeans in general who hate us, without even understanding Australia that well. I had more producers in Europe than I can count expressing interest in working vintage in New Zealand and Chile than this big brown land, and even more reducing Australian wine to simple fruit driven mass-produced and marketed brands. The simple fact is that Australia produces a minute amount of wine compared to giants like France, Italy and Spain, less than single regions in North & South America, and yet we are the fourth largest exporter in the world. Clearly we are doing something right. In truth the world hasn’t even seen the best wines and regions that Australia has to offer as they are still being discovered. Something that has recently been discovered is that the pre-Cambrian soils in the Heathcote region of Victoria are the oldest in the world. Another reason to hate us.

Galli Estate has a problem. The winery was founded in the Sunbury region on the outskirts of Melbourne, by Tuscan-born Lorenzo Galli for whom it is named after. You can hardly blame him for wanting to do this, and he is hardly alone in the world in this practice. There are however two hurdles with this name and they relate to the two biggest export markets for Australian wine. The first is the massive brand EJ Gallo in the United States, so no chance there. The other is the iconic logo/mascot for Chianti Classico, the black rooster! As such Galli is for now a domestic brand but will develop over time. Lorenzo arrived to Australia like many Italian migrants after the WWII, bringing with him family traditions of wine production in the most famous region in Italy for it. He bought land in Plumpton in the late 1990s and planted a vineyard, then a second and larger property in Heathcote about 150 kilometres north. Both properties were planted to different varieties, carefully selected for market demand, regional suitability, and future opportunities.

The western part of Victoria is the largest volcanic plain in the world, and as such it is very common to see very dry red-brown soils containing a combination of volcanic material. These dry regions are ideal for a number of different varieties, most notably for shiraz. As such this single variety represents over half of the plantings. In addition to several other Australian classics there are also some emerging varieties, particularly Italian wines that they grow. Sangiovese is a key grape, especially on the Heathcote property, but other varieties like pinot grigio, nebbiolo and fiano have also planted. Other alternative varieties include tempranillo and mouvedre, both ideal for these warm dry conditions. Ben Ranken is the winemaker and he is responsible for capturing the essence of these varieties and sites. He took me through a range of tank and barrel samples to look at the last two vintages, and you can see my notes here. He has pushed for more organic principles in the vineyards, and also less intervention in the winery. For now the wines are outstanding value at all price points, but their true potential is yet to be seen. Click here to read about some of the wines Ben showed me in tank and barrel.

Over 90% of the fruit that Galli grow is sold to other producers large and small. This is one of the benefits of having invested in the Heathcote region before the 2000s boom, and also in the fashionable sangiovese variety which the region is gaining a reputation for. One of these customers is Adam Foster, who makes both his own wine (Syrahmi) and wine with a friend (Foster e Rocco). Both Adam and Lincoln Riley had very strong backgrounds as sommeliers and was how they were introduced to a huge array of the best and most diverse wines in the world. Before this Adam trained and worked as a chef, and thus knew the importance of not only flavours but also textures on the palate. They both felt that there was a distinct lack of Australian-made wines which not only lacked this fundamental element, but also a savoury and more food-friendly edge. Why shouldn’t we be able to make these kinds of wine in Australia?

Adam’s solo project was to craft wines from his beloved shiraz and he gained both inspiration and experience in a number of Australian regions, as well as the home of the grape; the Rhone Valley in France. His skills and understanding were both instinctual and also developed ‘on-the-job’. The project with Lincoln however focuses on what I consider the Italian equivalent of syrah; sangiovese. Their reason for selecting this grape apart from the fact that it is so well suited to Heathcote where they source their fruit from, is that the variety is very versatile. They determined to produce five wines under the Foster e Rocco name, some to come earlier than others. The first two were a bone-dry rosé and a basic everyday Chianti style red wine. The third came not long after; an un-oaked carbonic Beaujolais style red, and the fourth (a riserva style longer oak ageing red) will soon be released for the first time. The final wine has been coined Bruno and is inspired by the great Brunello wines of Montalcino. This year will also mark a new venture, producing their first wine in Tuscany itself!

The drive up to Heathcote from Sunbury takes about 1.5 hours and is through very typical Victorian countryside and bush. The wine region itself is found between Kyneton and Shepparton, but despite the geographic area that it covers only a portion of it is planted to vineyards, for two important reasons. The first reason is because of its youth, as viticulture has only been developed there in the past 20 years. The second reason is because of its age as previously mentioned, but the 500 million year old soils are focused on a fault line of the Cambrian and pre-Cambrian red earth. Thus like other famous regions like Rioja and Burgundy, the key area is long and narrow, which further contributes to regional diversity through elevation and exposition. Similar to many other agricultural areas around Melbourne there were minimal vineyards planted here in the 19th Century but also suffered the slings and arrows of phylloxera and did not survive. Then along came my afternoon host in the early 80s and revived the region. His name was Ron Laughton, and the Jasper Hill wines he has crafted for the past 32 vintages are some of the best in the country.

The following quote by Tao Te Ching can be found on the Jasper Hill website. “True mastery can be gained by letting things go their own way. It can’t be gained by interfering.” This sums up the credo of the Laughton family, which includes wife Elva and two daughters Georgia and Emily, the latter having joined Ron in viticulture and winemaking. In order to keep to this they start from the vineyards, which are maintained in biodynamic and organic practices without the unnecessary certification. Ron was one of the first to be seriously committed to BD in Australia, and was the second (behind Julian Castagna) invited to join the Return to Terroir (also known as Renaissance des Appelations) association. His commitment to authenticity, expression of site and purity extends to planting vines on their own roots instead of rootstock, thereby putting the vineyards at risk of various diseases including the dreaded phylloxera. Serious commitment indeed.

Ron Laughton next to the first fire of the year

Three vineyards were planted and are still the only fruit used for the Jasper Hill wines. On the hill where the cellars and homestead are located is Emily’s Paddock, originally planted between 1975 and 1978, almost entirely shiraz except for 5% cabernet franc. The second Georgia’s Paddock vineyard is five times the size at 15 hectares, and whilst still dominated by shiraz includes riesling, semillon and nebbiolo. His reason for planting nebbiolo in 1993 was simply because he had a love of great Barbaresco. The final vineyard was planted in 1998, is named Cornella and the four hectares of grenache makes one wine. Back in 1987 there was a fire that swept through the area and did some serious damage to Georgia’s Paddock, and the scars are still evident on posts kept after replanting.

In practising the hands-off philosophy in such a warm climate, ripeness is never a problem. In spite of the high sugar levels and potentially high alcohol, Ron still has the original bag of tartaric acid that every Australian winery apparently needs, never having performed acid and pH adjustment. Concentration is achieved through low-yields, dry-farming, proper vineyard management and ideal harvest dates. Everything is picked by hand, and once this is done there really isn’t much more to do apart from gently capture the essence of the site and vintage. Whilst humble Ron and Emily have very strong ideals and will not compromise. Particularly with their rule of no photos in the winery. Ron and Georgia showed me some wines in tank and barrel (click here for notes), and I was also gifted a bottle of the surprisingly amazing Riesling, and a bottle of the 2011 Shiraz which was a blend of the two vineyards due to significantly reduced yields. 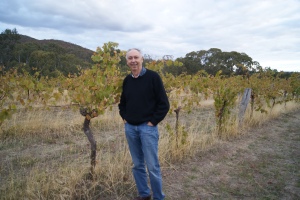 Ron in the Georgia’s paddock vineyard